Listlessness and dissatisfaction. God, what a great word. I'm experiencing it right now. Not my first time, so don't worry for me. Too much.

I having a bit of a disconnect from everything right now. I know you all have felt it, feel it, will feel it, etc. etc. ad nauseum. Nothing matters. Nothing matters. Nothing matters. It doesn't matter how much they lie. It doesn't matter how much they get caught in their lies. They know that their side doesn't believe anything anyone says that's negative. Bush can fart between now and November and his mignons will swear he's singing, joining in the chorus, saying up is down, black is white. Bad is good. I want to focus my thoughts elsewhere. We need to stay balanced, too. Everyone, take a deep breath. Thanks for indulging me. I feel better already. Now, on to today's post. 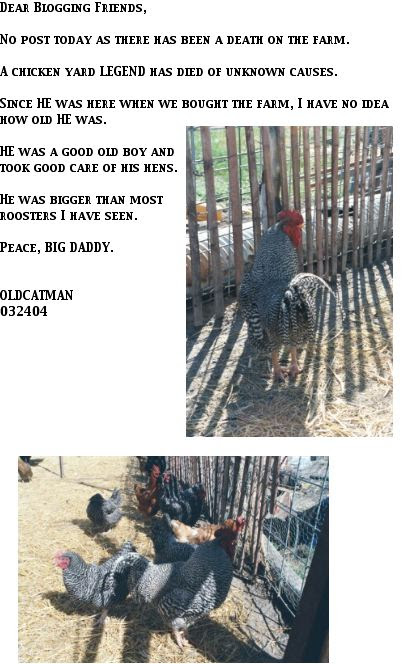 That's Big Daddy. That's what Old Cat Man called him. He probably called himself Sylvester, or something like that. Big Daddy died today. OCM is marking his passing by taking a moment.

If you haven't read Old Cat Man's blog yet, take a minute or two and stop by. OCM lives on a few acres on the side of a mountain somewheres in Colorado. I think he's in his 60s, retired in the sense of not having to go to an office everyday, but he's wide awake and paying attention, all the time, everywhere. He's also irreverently chronicling our times, cleverly using letters, a bit of photoshop, a sharp eye and biting comment. He and I are close in age and sentiment, yet worlds apart in our experience. As I get to know him, I learn everyday how much more we're alike than different. I'm Gay, he's straight. I live in a mad urban environment, he's up on a mountain in Colorado. Still, our lives and our goals have become interconnected. He may be a new friend to me, but damn, it sure seems close.

Big Daddy's death triggered a lot of thought and memory for me. I grew up in the country with chickens that lived in a yard with a rickety old chicken house with a couple of old roosters, one old, one a little younger. I thought it was natural selection until my cousin told me that it's customary to eat the ones that don't lay eggs, leaving an occasional rooster for whatever reason. You wanted a good rooster, though, cause when a hen decided to nest, you didn't want her incubating blanks.

We boys watched those roosters, too. Remember, we're farm kids. We know the score. That old rooster was getting himself some everytime he turned around. I sure liked that idea, once I learned what "getting some" meant. You hear people say if there is such a thing as reincarnation, they want to come back as a cat and just lie around all the time and purr and get fed. Yeah, and probably be castrated. Farm boys want to come back as roosters. Man, the odds may not be good for becoming Big Daddy, but if you made it, the rewards were great!

Old Cat Man, buddy, I'm with you tonight. Rest in peace, Big Daddy. You had your moment in the sun.