The Threat of Communism

May we all live in peace and have health insurance.
Posted by Ray Bridges at 2:42 PM No comments:

Take his taste in women, for example. What's the name of his first wife, Jennifer Something-or-Another? That's not fair. I know who she is. She's all right. She just happened to be caught unawares when her man found another woman more stimulating. That's tough. Who among us haven't been caught there? Okay, so maybe it doesn't happen to everyone.

But back to Brad Pitt. You know what I find depressing? Brad Pitt is now playing parts I always imagined were filled by older, mature men. Men I looked up to when I was growing up. Fuck! I'm a hundred years older than Brad Pitt. He will always be the hitchhiker in Thelma and Louise. You have to appreciate his marketing of himself. First, he casts himself in that reverse aging movie which his people and Hollywood rewrote after appropriating the title of that story by F. Scott Fitzgerald. Oh shit, you know the one. Something... Something ... Something... Oh yeah, now I remember: Something something or another an Benjamin Buttons. It's about someone who was born old and grew younger while everyone else grew older. I know I read that story about forty years ago, and I have no conscious memory of it, but I know that the movie subsequently made, only used the concept as they imagined it from the title of the story. Sort of like reading a book by its cover. I can't begin to tell you howmany times I made book reports in high school based on that idea. Oh sure, I read a lot of books in high school, hundreds if not thousands. Even so, I did not read every book for which I got credit. What can I say? I come from three hundred years (that we know of) of outlaws and con artists. It's in my blog, er, I mean, my blood.


I'm not sure where I'm going here, but what must we always be going somewheres? My point is, Brad Pitt should not be playing older, "mature" men. WTF does that make me? Dirt?

Okay, this is an aside: Brad Pitt impresses the hell out of me. I don't know him from shit, but he seems to be using his fame and celebrity to focus attention on areas that would otherwise never get any light. Take post-Katrina New Orleans. A lot of people "talk the talk," but not nearly as many "walk the walk." Thank you, Mr. Pitt.

I haven't written a fan letter since I was twelve, but bear witness, world, this is a fan letter to a remarkable young man who has done much to make the world a better place. Right on! Brother.
Posted by Ray Bridges at 8:57 PM 1 comment:

Why I interrupted Bill Clinton's speech at Netroots Nation

I agree with Lane's reasoning 100%, and I don't think his question was unreasonable. What is unreasonable is the Democrat elite, Bill Clinton included, thinking that they do not owe us explanations for their acts. Bill Clinton is the worst offender in this category, and has been ever since his presidency. He did not engage the GLBT community in the discussion of his many options as President. He made decisions and demanded that we acquiesce and support him because, well you know, the other side is worse. It's called "betrayal" because it's done by someone you trusted. I have not cared for Bill Clinton since the March on Washington in 1993. He treated us like we were a strange disease and avoided us. Fast forward to 2009: nothing's changed, really. Bill Clinton thinks we should be thankful for his magnitude. Well, I'm not. Now here's my personal peave about DADT: the homophobes in the military never stopped asking. The witch hunts continued. No one in Clinton's administration ever tried to make them keep their part of the bargain. Ask anyone of the ten thousand or so Gays and Lesbians who were discharged since DADT if they did anything to call attention to themselves.

Bill Clinton owes the GLBT community a sincere apology for fucking us over when he was President.
Read the Article at HuffingtonPost
Posted by Ray Bridges at 11:00 AM No comments:

Is John Bolton Really That Big an Asshole,
or does he just play one on TV?

Inquiring minds want to know. In a column for the Washington Post, he criticizes former President Bill Clinton, former Vice President Al Gore, and by implication, President Barack Obama for their efforts which led to the successful return of Euna Lee and Laura Ling, reporters for Al Gore's San Francisco-based Current TV who were taken prisoner by North Korean authorities last year. My vote is that he is a total asshole in his real life as well.
Posted by Ray Bridges at 12:23 PM No comments:

This song is dedicated to the phoniest hypocrit in southwest Louisiana, Beverly J.

Somebody call George Will 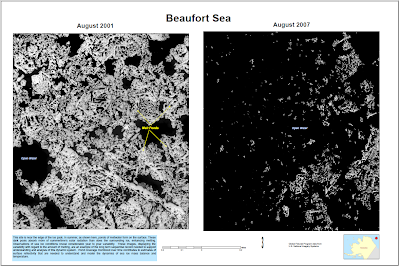 This picture of the Beaufort Sea almost free of ice was kept secret by the Bush regime. I'm sure they thought it might send the wrong message to America's enemies.

Ow! The Stupid, it Hurts

I hope Amy Winehouse doesn't fly so close to the sun that she burns out. I'm spending the evening alone, on purpose, listening to Amy Winehouse's album, Frank. I find it -- and her -- incredible. Take a few moments and listen to this incredible woman sing the blues. She's a wordsmith, too, so as much as you can, pay attention to the words. If you can't understand them, do a Google search and then follow along. Here's a link to her singing Come Fuck Me Pumps. Amy Winehouse doesn't do elevator or background music. You either listen to her or you don't hear her. Plain and simple.
Posted by Ray Bridges at 8:45 PM No comments:

How Stupid is Texas?

Well, Texas is an inanimate object incapable of being smart or stupid, so rephrasing: how stupid are Texans? If their governor is any measure, Texans are setting new marks for stupid. Texas Governor Hair Do, aka Rick Perry, hates the U.S. Federal government ever since his BFW, George "Dubya" Bush quit being President. First, he threatens that Texas will secede if forced to use any of that dirty ol' federal stimulus money if it goes to ordinary folks instead of his friends' pockets.

"Moreover, Perry’s “state sovereignty” cries don’t carry much credibility. In March, he rejected $555 million in federal stimulus funds to expand unemployment benefits, arguing that accepting the money would burden Texans with “higher taxes and xpanded obligations.” However, just this month, Perry was forced to ask the federal government for a $170 million loan to cover unemployment insurance and the state is expected to request a total of $650 million, around $100 million more than Perry originally rejected." - Ben Armbruster at Think Progress

Next, he says he'll invoke the 10th Amendment to the United States Constitution to keep Texans from benefiting from any type of health care reform forced upon it by the United States Congress. Oh, and he doesn't acknowledge Congress' roll in the reform, preferring instead to refer to it as "Obama Care."

Says Perry: “It really is a state issue, and if there was ever an argument for the 10th Amendment and for letting the states find a solution to their problems, this may be at the top of the class,” Perry said. “A government-run healthcare system is financially unstable. It’s not the solution.” How's Texas doing at finding a solution to their health care problem? Not very well, if numbers mean anything. According to U.S. Census Bureau report, nearly 25 percent of all
Texans lack medical insurance. To Texas Republicans this is not a problem because it's mostly Mexicans, Blacks, and White trash that don't have insurance. None of those groups is important.

Ben Armbruster, writing for Think Progress, gives Gov. Perry all the rope he needs to hang himself. Read the entire article.

I was invited to a 4th of July Barbeque at my friends, Rich and Jerry. Jerry barbequed ribs and chicken, Rich made an outrageous potato salad, Ray made some dynamite macaroni and cheese, and I made sweet corn & toasted walnut risotto.

Now, I loves me some good risotto, and this was just about as good as I've ever had. This serves anywhere from six to eight people.

You begin my toasting about 1 cup of walnuts. Toasting them really does bring out the flavor. Put them aside until you finish the dish. They're the last thing you add.

Next, cut the corn off the cob and scrape the juice out of the cob. Not put the corn to one side.

In a large skillet, melt one stick of butter on low heat so you don't burn it, and then turn the heat up and add the chopped onion. Cook for five to ten minutes and then add the chopped garlic and shallot. Cook for another five minutes. Add the rice and cook with the onion and garlic for about five minutes. Now add the white wine and cook until most of it is absorbed.

Begin to add the hot chicken broth, one can at a time, slowly, letting most of it be absorbed by the rice. This should take about 15 minutes. After adding the last can of broth, add the corn and cook until most of the liquid is absorbed. Add the last of the butter and the parmesan cheese and when well well absorbed, turn off the fire and add the walnuts. The chopped parsley, the green onions and the tarragon are sprinkled over the top before serving.

Talk about good!
Posted by Ray Bridges at 10:16 AM No comments:

I'm not saying it's true, I'm just showing the facts.

Posted by Ray Bridges at 8:38 PM No comments:

I'm coming back to Blogger. This was my original blogging home. I moved in Typepad in May of 2004. At the time, Typepad was offering features not available to Blogger. That's all changed. Blogger has become much more finessable.

For the next month or so, I'll double post, here and there. After the first month, I'll stop posting at Typepad and leave a re-direct message. I'll leave that up for a month or two, and then stop paying them the $4.95 a month. That gives me two to three months to migrate my archives over here.

Thanks for stopping by. Please feel free to leave a comment or suggestion regarding the impending migration.
Posted by Ray Bridges at 7:17 PM 1 comment: