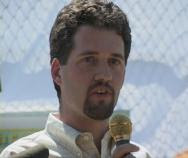 Bush prefers our pretty boy to his pretty boy
By JANE TABER
Friday, January 16, 2004 - Page A1

OTTAWA -- This is the tale of the two Scotts -- one American, the other Canadian. One is dark-haired, the other blond. Both are 35 and both work for the most powerful men in their respective countries.

But, according to Mr. Bush, Mr. Martin has the prettier Scott.

This is what happened:

Mr. Bush met Mr. Reid earlier this week at the summit in Monterrey, Mexico, just after the President's breakfast with Mr. Martin.

Mr. Reid was not initially in the hotel room where the two leaders and their closest advisers met, but was called in to brief the Prime Minister at the end as the group waited for the media.

Mr. Bush wandered over during Mr. Reid's chat with the Prime Minister. Mr. Reid introduced himself and shook hands with Mr. Bush.

"Well, what do you do for this guy?" the President asked as he pointed to the Prime Minister.

This is true. Mr. Reid handles a number of files and performs a number of different duties, depending on the issue and the day.

This is true. His Scott has a receding hairline and is on the chubby side, while Mr. Martin's Scott has a full head of hair and is quite fit.

For the first time in his life, Mr. Reid had no reply. "I didn't know what to say," said Mr. Reid, noting later that he wished that Mr. Bush had referred to him as a "rugged-looking young man or something.

"But I'll take what I can, I guess," he joked. "When a Texas Republican says you've got a pretty face, then I guess there is just no way around it."

[Joe Richardson: Does any of this sound familiar?]

But wait, there's more from the Ottawa Xpress,:

The gossip pages were nearly unanimous: Paul Martin's first date with new American boyfriend George W. Bush went so well that the two are talking about seeing each other again very soon! According to the press, Bush actually paid attention to Martin's hopes, dreams and needs. But did Martin pay attention to ours?

 We heard from Martin early last week that he had "already begun to change the tone" of Canada-U.S. relations. Talking the language of relationships in everyday life, he said, "If, in fact, you know the person you are dealing with and if you have confidence with the person ... then you are going to be able to make much greater strides than if you don't."

 As it turned out, both leaders love sausage, and over breakfast talk about business and baseball at the Summit of the Americas, Bush said that although he won't promise he'll never deport another Canadian to a foreign torture chamber, Martin will be the first to know before it actually happens. Tell that to Maher Arar, or even untortured Canadians worried about the country's sovereignty.

 Martin also allegedly sweet-talked us the right to at least try and profit from Bush's occupation of Iraq, although there's no guarantee we'll land any of the reconstruction contracts. Bush said last Tuesday that Canadians "want Iraq to be free. They understand the stakes." Prior to the meeting, the U.S. idea of "the stakes" meant a world under threat from Saddam-backed terror. We didn't see it that way, and thankfully we have no more troops to send.

 "I think it went very, very well," Martin told reporters. "The vibes were very, very good on both sides." Louise Elliott, with Canadian Press, was impressed enough to note that "Bush spent close to a half-hour of private time with Martin and another 45 minutes with him at breakfast with officials from both countries - in total, half an hour more than the allotted time." Yeeouch - a cuddly favourite in the American harem.

 But as Jane Taber wrote in Friday's Globe, Bush might have his eyes on Martin's right hand man, Scott Reid. "Well, you got a pretty face," Bush told Reid, after asking him what he does for the PM. "You're a good-looking guy. Better looking than my Scott anyway," referring to presidential press secretary Scott McClellan. Maybe the prime minister should leave him at home next time.

Back to Me.
Have we discovered the real reason Andrew Sullivan is so hot to be Bush's bitch?
Posted by Ray Bridges at 6:30 PM No comments:

Posted by Ray Bridges at 1:49 PM No comments:

I Used to be a Republican


No, really, I did. I was young. They had better parties. They were just a crowd and I worked them. I don't know why, but at one time they made sense to me. I used to be a Catholic in the same way. When it was a romantic idea to be Catholic, I enjoyed being there. When I found out what they believed, I was appalled! Same with Republicans. Trouble is, I have close friends from that period. Not only are my close friends Republican, but they are devout Bushies! Oh, God. I maintained with them as long as I could, but one day Leon called and started spouting that nazi shit, er-I mean, her Fox-news inspired commentary on current events, and I lost it and told her what I really thought. I mean, I told her what I really, really thought.

So now she's mad at me for having an opinion different from her own. You know, I can live with that. She and her people have been good to me. Thank you. My people and I have been good and generous to her, as well. She's welcome. But there is a history at work here, as well. My families and her families have been on opposite sides of almost every war and subwar they have ever experienced together. I was as adamant in my opposition to the war in Vietnam as she were in her support of Nixon and his lies. During the Civil War, my great-grandfather and his brother were deserters and copperheads. My Ashworth great-great grandfather avoided service to the South and named one of his boys, Ulysses. Just guess who he thought the real hero of the Civil War was? During the American Revolution, her family was rebels, my family was loyalist. Even before that, during the Regulator-Moderator fight in South Carolina after the Cherokee Wars and before the Revolution, her family was Regulator, mine outlaws and Moderators. There's a pattern here, duh?

But I'm mad at her right now because she's giving that draft dodging lowlife a free ride. I love her dearly, but she brought the skunk to the dinner table and is now mad at me for saying it stinks. Leon showed me disrespect by her original call to me, and then got mad at me when I gave you my opinion on the subject she brought up. Think about it. I would immediately call her and say whatever would be necessary to heal this breach I feel, but I can't change my mind about how stupid I think she is for not ever questioning the obvious in regards to Bush's claimed military service during Vietnam. Her failure to acknowledge that fact to my satisfaction has become a barrier between us.

And just to harden my heart, her political party has declared itself anti-Me. They want to AMEND the Constitution to permanently and forever exclude ME from full participation in the many rights inumerated within it. Her memory is short, but let me remind everyone of this fact: the Germans never did anything to the Jews that wasn't perfectly legal. They wrote the laws that made it legal to persecute Jews. Leon's people, her political party, would make my people legal targets. If you allow those people to speak in your name, you're fucking well endorsing all of their points of view. You're as evil as they are.

There. I feel better. Well. Okay, I'm going to save you the grief of banishing me from your life this time, though. I'm just going to say goodbye now. Good-bye.
Posted by Ray Bridges at 9:16 PM No comments:

Posted by Ray Bridges at 2:59 PM No comments:


I watched Diane Sawyer interview Jennifer Anniston last night. Yawn. On both counts. Diane Sawyer's pablum serving delivery did nothing to warm Miss Iceberg up. Nothing she could ask made Ms. Anniston sound interesting or engaged. I watched as long as I could, flipping back and forth between something on PBS that was much more interesting. Towards the end of the interview, Ms. Sawyer asks Ms. Anniston to say something about her five co-stars that they probably don't know about themselves. Ah, shucks, Diane, that's powerful stuff. And wow, what an answer Ms. Anniston gives: Why, the tin man doesn't need a heart with all that love! And scarecrow, you're the smartest person here. You just need a degree. Or in the case of Courtney Cox, why Courtney, you're absolutely beautiful with an inner beauty! Oh please, dear Jesus. What drek.

We did learn that Jennifer got mad at her mother for a book her mother wrote that Diane tells us Jennifer felt was exploitive of her fame. Jennifer didn't have to say anything, and as inarticulate as she came across, it's a good thing. I hope both she and her mother live long enough for her to get over herself and beg her mother for forgiveness. The question she should be asking, is not whether her mother made any mistakes, but whether she did the best she could given the circumstances. Ms. Anniston is now old enough to interact with her mother as an adult, and the standard of expectation is different for adults than it is for young girls whose mothers drive off their daddys.

Thanks, Diane, for an evening of vapidity, yours and hers. (houston)

Posted by Ray Bridges at 7:07 AM No comments:

Listening to NPR this morning, I heard that Bush is going to announce a new space exploration mission this week. Why? Did they hear that there was oil there and the locals were hiding terrorists? That's about the only reason I can think of that might warrant how this administration actually spends our money. They sure don't spend it on education where they said they would. This is actually an example of how much power the White House has in setting the agenda in an election. For the next week, reporters will be asking the Democrat presidential candidates what they think of the President's plan, not what they think of space exploration. Why? Because we're all for space exploration. It's like motherhood. Who's against it? That isn't the issue. The President's vacuous, attention getting "plan" is the issue. It's not going to fly. The President knows it won't fly. Everybody for it knows it won't fly. Everybody against it knows it won't fly. So why are we even saying the word "fly"? It's just bullshit. Bullshit, bullshit, bullshit! I'm sick and tired of bullshit.

Posted by Ray Bridges at 7:26 AM No comments:

I'm back from the holidays. If you're curious, this is what I've been up to.


Well, Britney's back in the news. Is there any better example of how marriage has been trivialized by heterosexuals? I am not a proponent of Gay marriage. I am adamant about equal treatment of Gays and Lesbians, but I have never thought we should emulate a failed institution.
Posted by Ray Bridges at 7:05 AM No comments: